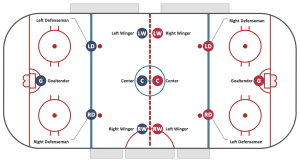 A privately practicing family attorney by profession, Terry Chucas is also a longtime hockey fan and a former competitive player. Terry Chucas competed from age 7 to age 45 and played in the 1984 International Tournament with the Canadian old-timers’ team.

In a standard game of hockey, there are six positions to fill on the ice at any time. The forward line consists of the right wing, left wing, and center players, the latter of which is responsible for covering the middle of the play area in both the offensive and defensive zones. The center also serves a role similar to that of the quarterback in football, as he or she plays face-offs and leads attacks on the competing goal.

The right and left wings play on their respective sides and play primarily in the offensive zones. They are also active in attempting to block opposing players’ actions, though blocking behind the defensive line is largely the responsibility of the two defense players. These team members cover either the right or left side of their own zone and attempt to keep the puck away from their goal and move it instead toward their forwards.

The team’s sixth player on the ice is the goalie, and his or her sole responsibility is to keep the puck out of the goal. The goalie wears special equipment to protect himself or herself from the puck, as the position allows the use of the body as a block. The goalie typically remains in the game for its duration and rarely leaves the net.